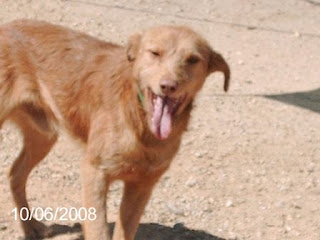 Piruças was living in a residential area where he was being protected by a lady who was feeding him. There, he was going around freely and he seemed happy. However, another woman living there has a few dogs, one of them a pitbull which all run around free too.
I want to say that it is not the fault of the pitbull. It is the owner who should take care of her dog. The pitbull, being unsocial by nature and running around, finally attacked the young dog and bit him seriously, especially on his mouth. The animal was going around bitten, with wounds, suffering and some frustrated construction worker even kicked him wanting to finish him off. If this guy had a man in front of him, surely he would put a tail underneath and run away! And Piruças did not bite back, did not defend himself. If he had, of course he would be considered a dangerous animal. But who was really dangerous in this story?
He is now with us, getting better and is a little angel.
Publicada por Association Bianca à(s) 16:25