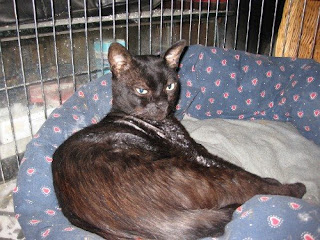 Phil was hit by a car and the driver didn't stop, but the driver of the car behind him saw it and stopped to help teh cat! Phil let himself be caught immediately. The vet who saw him said the he had a fracture of basin but it was not new, he must have had another accident before....

Furthermore, he lacks some teeth, but not of old age because he's still young. We really don't know the cause but for this reason he can only eat canned food, not dry food - eating dry would be to difficult for him.

Phil is very sweet and it's perfectly evident that once he had a home. He purrs and ask for affection every time he sees someone. He doesn't know how to defend himself from other cats in the streets - you can see scars on his neck and body and he does not know that he has to run away from the cars.

For the moments he is in a cage, recovering... His fracture needs a complete. Afterwards we hope that someone will give him the opportunity to have a new home.