An incredible story of Jazz

Jazz was found abandoned a few years ago in Lagoa de Albufeira. He was avoiding people so only with certain difficulty that the volunteers of Bianca managed to catch him. Then he spend a few more months in the shelter, resulted to be a very nice and friendly dog and he got adopted. He got a good home and lived there happily for one year.
Then his owners went on holidays and placed him in a dog hotel, a thing that a responsible owner would do. The hotel however.... lost the dog. Two days into her holidays the owner, being on another continent and without possibilities of quick return, received a phone call from the hotel that the dog disappeared and they don't know where he is.
As it appeared later, the dog went out through the main gate without anyone paying attention to him.
Bianca volunteers engaged an immediate search for Jazz and the owner joined as soon as she could come back (the dog hotel did not get involved). The dog was rumoured to had been seen there and there but they never managed to actually find him. The owner put lots of ads on the Internet and papers in many places, cafes, cash machines, bus stops, vet clinics, shops, supermarkets, anywhere you can imagine. Some people seeing a similar dog on the street were calling her, she was always going, but it was never him. Nearly 8 months have passed.... She never stopped looking but was losing hope....
When she received another phone call ffrom someone whose neighbours were feeding a stray dog similar to Jazz, she went although without much hope. And it was Jazz! Scared and fugitive, he was eating the food left for him on the street and running away, noone could approach him. He did not recognise his owner, he run away. He did not come back to this place for a few days but eventually he came back. The women feeding him were gradually moving the bowl with food so one day they managed to direct him into a closed area and there they caught him. He was very scared.
The owner came to get him and she took him back home. Once at home it was as if the memory came back, he became immediately relaxed, went to his own bed, recognised all the family members. Now he is safe at home. After 8 months on the street.

Never give up. If you lost your dog, never stop looking and never stop advertising.
A very important tool is http://www.encontra-me.org/ : a webpage where you put ads when you have lost or found a dog or a cat. There you can also order a badge with telephone number for your dog. Your dog should always have your telephone number on him. The electronic chip is also important but it is not enough. 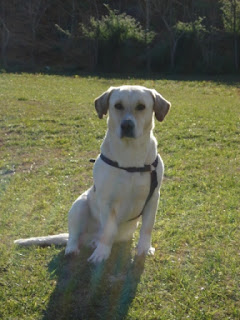