Karl and his new family in Norway

This is my story about Karl.

Me and my husband where talking about getting a dog. I love long walks in the nature and missed a friend. We started at “Finn” a marketplace on internet. We wanted a puppy. Every evening I was watching at different dogs. Suddenly Karl appeared on the screen. I felt that it was something special about him, but after discussing with my husband he thought it would be difficult. We wanted a dog to walk long trips, and Karl had operated his legs. And he was far away in Portugal, on a rescue shelter named Bianca. I mentioned Karl for my friends and colleges at work. But they were constantly warning me about dog diseases and that “maybe Bianca would try to trick me? Why couldn’t I get a puppy from Norway? How stupid I was!”

Four weeks later, I was still looking for a dog, but without luck. I wondered if Karl had gotten a home. But, there he was, at “Finn”! Every day I was thinking about Karl, I just could get him out of my mind. Finally I wrote to Aina who was the Norwegian contact for the dog shelter Bianca, and asked her about Karl. She wrote that they didn’t know if he was able to walk long trips. Aina sent me a video of Karl and then my decision was clear: It didn’t matter anymore if he wasn’t able to go long walks. I had a strong feeling that this was the right thing to do. I wanted only Karl.

For three months I was waiting for Karl, and in the Easter of 2010 we drove to the airport, very excited. I just loved him from the first sight. Karl was so shy, small and sweet!

My colleges at work warned me about a dangerous traumatized dog. They were so wrong. Karl was the sweetest and most gentle little dog.

In the beginning I was afraid of going long walk with him, because of his legs. I remember the first time I let him run without a leash. My god! He was so happy and he ran so fast, like a grey hound! He was a bit skeptical to our cat, but soon they were getting along god.
I looked at the video of Karl in Portugal, and I noticed that his rear legs seem different today. They are stronger with more muscles and not so crippled. His legs are not a problem at all!

Tommy, my husband took Karl for fishing trips in the summer. He is very fond of Karl too! I took him on long hiking tours. On our trips in the mountain at our cabin, Karl is without a leash, but he is always following me close, as if his afraid of losing me.

Almost every day Karl is with me at work. (My college Christian loves Karl!) In lunch time we are walking in the wood. Karl is a bit suspicious towards other dogs. He was a bit afraid of the puddle of my boss, but after some weeks they get along just fine, playing together. The neighbors’ asked me what kind of dog Karl is, and I answered very proud, that he was from the dog shelter BIANCA in Portugal. 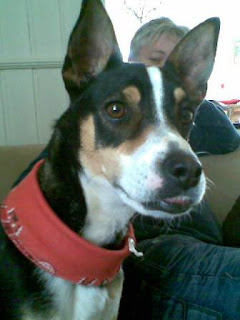 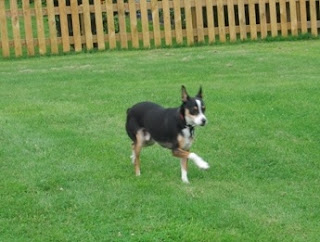 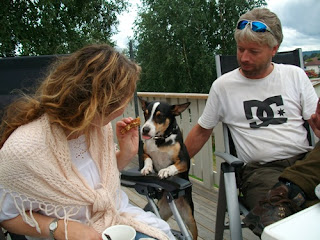 Karl, the shy dog became a happy and playful dog. Karl made my life so good. Every night Karl is lying close to me in our bed. At last Karl got his family.

Thank you Aina and Bianca!