Who remembers the BIG Palmas?

From the letter of his owner:

"Palmas came to us in Algarve with mistrustful eyes, one of those looks of someone who has been taken out from his home environment and someone who had lost his faith in people. He looked at us and at others from the side and with a cold and intimidating look. My wife had reservations from the beginning regards this adopted dog. He sometimes picked up fights with Taia, our dog that was already there, especially because of the food and chew bones, as he thought that the two bones had to be for him. Each time he found a hole in the fence he would go out barking at people and cars and then he would be looking for something, maybe his old home, but he would come back not knowing where to go otherwise.....
I am used to having dogs of breeds that have strong personalities so I knew I had some work to be done - love and determination being the most important part of it. So it took a long time: we spent time with him, we gave him love, we showed him our affection.
Today Palmas is a completely different animal. The initial suspicion is gone. Right now he has a sweet look, he fully respects the space of Taia, he wants to play every day with a ball or a stick when I get home. He has not more tendencies to run away as he now accepted that this home is his home and he identifies himself with the place. He has a very strong connection with the whole family, especially with my youngest son of 13 years, although this is nothing new as animals have always been a part of my son's Anthony life. He perfectly fulfills his role as a watchdog. He is a powerful and intimidating dog, with a strong low bark and he will not allow anyone to approach the gate. He likes to walk on the lead, unfortunately it has not been possible  lately because of the misfortune that happened to me.
In December I locked in my car with the keys in the ignition. As I was away from home I had to take a taxi to get home to pick the other set of keys. I jumped over the wall and my shoe got entangled so I fell down from a height of about 3 meters. I was laying on the floor, completely helpless, having broken my right arm (a very complicated fracture that resulted in a six hours operation afterwards). Palmas understood that I was in trouble when he saw me laying on the floor in pain and he lied down beside me, put his head next to my head and he was constantly licking my face. He remained next to me all this time until I gathered strength to get up and go to the hospital.
We are completely surrendered to this big and sweet dog.

I wish you a successful continuation of the good service they you are doing for the animals." 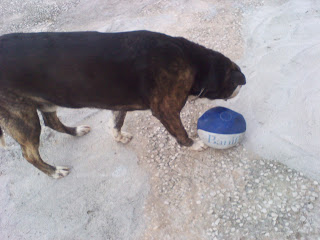 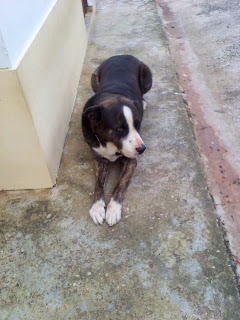