Look at this movie: this little girl, Jackie, was called Emy in Bianca and was found abandoned as a tiny puppy with 7 siblings. Now she lives in Germany and is an agility champion. A few days ago she participated in a competition and won :) Look at the movie, she is fantastic:

And this is what her owner says:

13/06/2011
Yesterday was Jackie's „big day“. She went to her very first agility tournament, which is already quite late, considering the fact that she is already two-and-a-half years old. There were dogs starting, just 18 months old as well... but we took our time.

I didn’t want to start with a doggie, that is too young and then runs out of the field or starts to bark at the tunnel instead of going into it... so we trained a lot, with lots of fun … an this is, what happened yesterday.
We were the fifth team starting, out of more than 40 ... I was so nervous. My last agility tournament was with Luna 2006 ... And Jackie was so perfect !! She made no mistake ..... and won !!! We got the first price and I wanted to thank all of you, who made her come here, that you made her find her way to us. She´s perfect dog for the kids and now she´s an agility dog, too. And she´s no border collie and no australian shepherd, just a poor soul from a lonely street ... we love her so much !!! 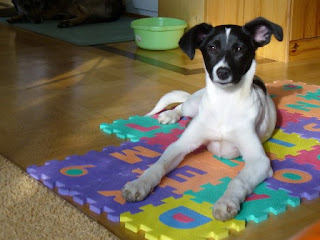