Sick and badly treated dog abandoned at our door 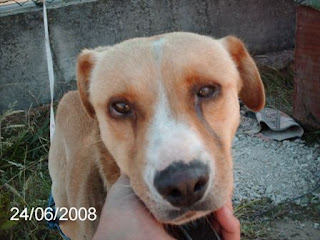 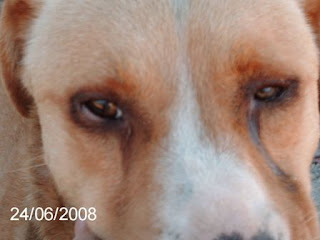 Monty was abandoned on our door on 22nd of June in the morning by a couple that came from Montijo. They actually have guts to leave their telephone number. When we called them the woman said she did not want the dog anymore. We said we would file a complaint with the police and she said we were welcome to do it, she was not afraid.

The same day Ana went to a file a complaint with SEPNA, a branch of local police (GNR) that deals with bad treatment of animals. Then, the office of the Secretary General of the Veterinary informed us that the procedure is the following: the complaint filed by us with SEPNA Montijo (the city where the couple lives) goes to SEPNA of the region (Vila Franca de Xira) and then it follows to the central of SEPNA in Lisbon, where the Director General will see if the case merits a fine or not. Can you follow that?!

Monty is a lovely dog, very scared and he has certainly been treated very badly as he is scared when we approach him, he hides or he lowers himself and nearly lies down.... Certainly he has been kicked more than once.

Moreover, he has an ilness of his eyes that requires a surgery. It is entropia (eye lids rolling in and causing re-occuring abrasions to the eyes).
It will be another expense for Bianca and we would appreciate donations.....