And three dogs more abandoned before holidays (Joli still with us) 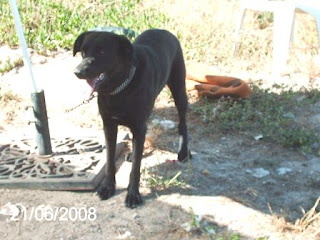 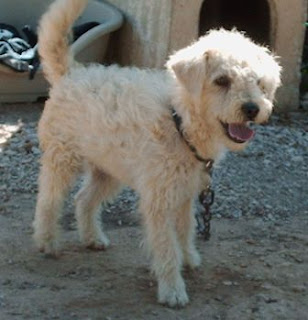 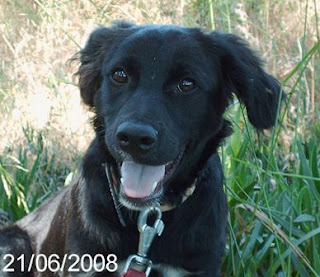 Felipe was found near the place where Bianca organises its adoption fairs. Pituxa nearby a few days before. Felipe is a 7-months old baby dog (the third picture, a smiley mouth) and Pituxa a young adult female (the second picture, type caniche).

This place is a national road with big traffic, it is very dangerous for the animals there. Felipe jumped in front of Filipa's car and she stopped and took him in.

Joli, a young male, was found at the door of the kennel (big black dog, first picture). Attached to a chain belonging to a dog's house which was empty as its ocupant had just gone for an operation. He is going to be surprised when he comes back....

We have most dog's houses inside the terrain but some are just outside. That's where we put new dogs to spare them a shock of entering to the kennel immediately or some males that don't get along with the others.

Well, Jolie was there, early morning, when Rosa came to the kennel. Crying and barking, it was a shock for him.

It is a period of holidays now. People abandon their dogs with cold blood because they are an obstacle in holiday planning. And we are getting more and more of them.

We don't know where to put them, we lack space! We are running out of food. We need to buy food. Also for the puppies, we still have around 30 puppies. We need to buy vaccinations. Half of our animals need vaccinations, that make 100 animals, each 3 vaccinations: rabies, kennel cough and lepto, esgana and parvovirose.

We depend on financial donations, please help us with money to buy vaccinations or bring food for our four-paw friends.