They lived in danger on the side of the road 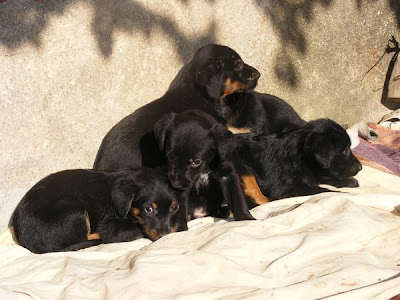 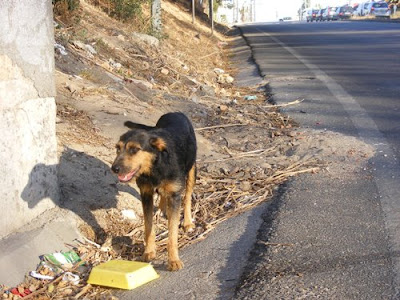 Marta, a black medium sized female, lived on the side of a national road. She was having puppies regularly, then some of them were dying killed by cars and others, those that survived, were being sold by an alcoholic woman that lives in a nearby ruined house.

Marta has had puppies again recently. One of our voluntaries went there very early morning of July, 31 to rescue them from the side of the road and bring them to the kennel. They were 5 of them in the evening, but only 4 in the morning, one had already been killed by a car. Portuguese drivers don't have a tendency of slowing down when they see an animal on the road.


Our voluntary took the puppies but he also wanted to take the female so we could have her sterilised but she was not there. He left with the pups and came back to teh palce shortly after, the female was back. But the woman that was profiting from selling the puppies was also there, already drunk and did not let him take Marta. Our volunteer contacted the police and as Bianca took responsibility for Marta, a police officer accompanied our volunteer and helped him take her from there.


Case closed - it has been going on for too long already causing anxiety of many people with good hearts.

UPDATE: Puppies all adiopted, Martinha is still with us.