HELP FOR SPECIAL TEST AND ALLERGY SHOTS FOR DÉLIO

You know the story of Delio:
He was adopted as a puppy and his owner considered him too lively so he was giving him tranquilisers every day. That caused that the dog's defences went down and he has become allergic to many things.
Soon his body was covered in wounds.
He was abandoned by the owner at the municipal kennel to be euthanised, we rescued him, brought back to the shelter and started a long treatment.
We had him tested against tick fever, leishmaniasis, mushrooms, rabies - everything was negative, until finally we could establish that he was allergic to nearly everything in food and environment. We need to know however what exactly he is allergic to in order to be able to give him a specific vaccination to boost his immune system. Such test is expensive, costs about € 200 plus the vaccination that will be developped specially for him, another 100 €.
He seemed much better recently but a few days ago the wounds started to appear again. So we need to proceed, we cannot wait until his all body is covered in wounds again. We cannot give up on him. We want him to be a healthy normal dog that could be adopted. We need your support for the test and the vaccination.

Photos of Delio:
Délio puppy when arrived to Bianca shelter and was adopted: 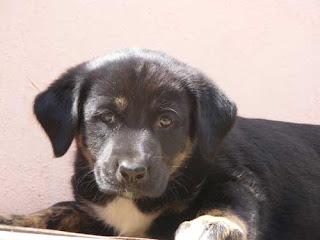 Délio when the ex-owner abandoned him in the municipal kennel to be euthanised: 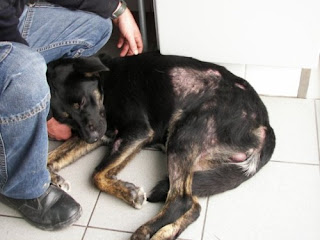 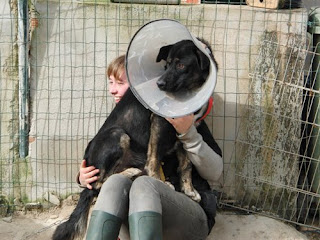 Délio after 6 months of treatment: 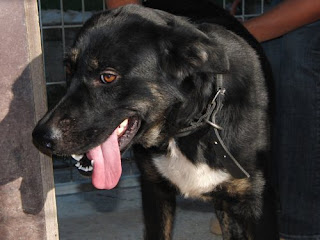