Gida (the redbrown sheep-dog type dog) was born on the streets of Sesimbra… A few months old she stroke luck – she was rescued by Bianca volunteers and came to the shelter.
When she was around 1 year old she she found a new home in Copenhagen with me and Lobo - my sweet, gentle, old dog, who calms Gida down and has taught her everything a dog here needs to know (that there’s no need to attack the vacuum cleaner, and that playing with seaweed at the beach and swimming in the sea is fun, not scary!)
Gida is now around 3 years old now but will behave like a puppy forever, I think. She is the class clown, amazingly playful and always comes up with silly ideas! Growing up on the streets and in the shelter, she learned early on that anything(!) will make a fun toy – any tiny bit of paper, tuft of grass, or beetle is fun to toss around, and chasing leafs blowing in the wind is exiting! As I soon discovered, this also meant that various items in my apartment caught her attention… A variety of things has been chewed to bits or shredded – a pillow, laundry hung to dry, CDs, a pair of glasses, a roll of toilet paper… So, my house is now Gida-proof. (But, as I later realized, not Nemi-proof… Because Bianca dogs can jump very high!) Eventually Gida adjusted and learned what are dog’s toys and what are not. She is a very affectionate and cuddly dog, and she is trusty and loves everyone she meets.
I strongly believe that dogs, being pack animals, need to live with other dogs, along with their humans. It would be nice for Gida with a peer who was up for long walks and playing rowdy. Streetdogs make wonderful pets, and why breed dogs when there are so many unwanted animals? I decided to contact Gosia from Bianca on getting another dog from the shelter.
Everyone at Bianca are extremely dedicated and do an incredible amount of hard work to give any neglected, abused or abandoned dog a chance for a new, happy life with loving, responsible owners. They need our support! I did volunteer work at Bianca last year, and recommend anyone who loves dogs, and can cope with the hard work at the shelter, to consider volunteering at Bianca! You can really make a positive difference for the dogs.
As far as getting another dog, I thought of Debbie - a scruffy, wiry furred black dog, about 3 years old. She was quite shy, gentle and had been at the shelter far too long. At many other shelters, she would probably have been put down, but luckily she was brought to Bianca! I remembered her from my stay at Bianca, where she often lay flat on the roof of her doghouse and looked somewhat gloomy. She also had a striking beard! (I love dogs that are considered “ugly”) She got along with all the dogs at the shelter so that was promising as far as her agreeing with both Gida and Lobo.
Debbie, who is now called Nemi, arrived in late October 2010 with a Bianca volunteer. Nemi was anxious and scared, jumped at any strange noise, and was terrified of the traffic. But she trusted me immediately. After a few days getting accustomed to the new environment, she was introduced to Lobo, and the next day to Gida. Lobo was hesitant but accepted Nemi, who behaved distanced but polite to the older dog. Gida and Nemi instantly became best friends! As expected, they all needed some time to get to know and trust each other, but after a few weeks they had become a dogfamily. Nemi was already house trained when she arrived, and never had an accident inside the apartment. She also walks well on the leash and was attentive when I called her name. Still, she seemed to be very earnest and did not want to play. Having lived on the streets, she was obsessive and defensive with food, but soon learned that it was no longer necessary to guard her food. And I learned not to leave anything remotely edible on the kitchen counter, because Nemi (a 22 kg dog) will jump up on the stove or stroll along the kitchen counter in search of a treat!
Now, just 3½ months later, Nemi is a different dog from when she first arrived. With lots of patience, positive training methods and by watching how her dog companions behave, she has become a confident, happy and playful dog! She and Gida love to play scuffle, “catch me if you can”, tug-of-war or toss a teddybear around. That being said, she probably had many bad experiences from living on the streets, because it seems she always expects the worst when she meets a new dog or person. So it is ongoing work to convince her that she does not have to act defensive or flee when someone contacts her. But when she has met people/dogs a few times and recognizes them as friends, she will run up to them, greet them very enthusiastically, bouncing around and waging her tail! 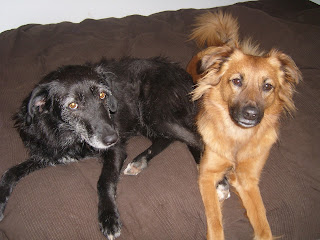 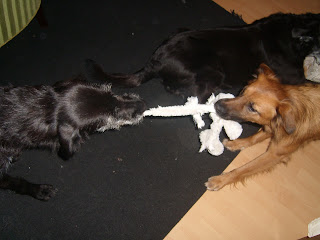 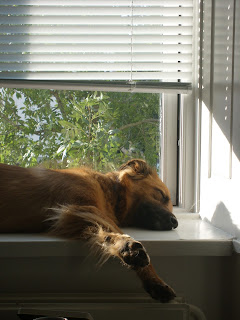 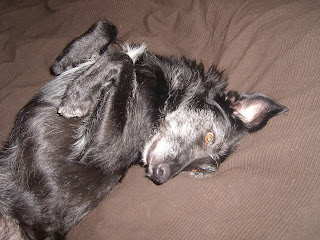