Milo who lives now in Sweden!

Early September last year Loke, my very best friend (a little shih tzu-mix) for 7 years, quickly passed away in what we now know was a stroke. And even if we still had our older dachshund-mix Bibbi both Mum and I, especially I, had a real hard time melting it and continue with our lives. Even since we got Loke as our second dog we knew that our home was least a two dogs-home, so when Bibbi started to show that also she was feeling lonely we decided to start looking around.


We knew we didn't want a puppy and a couple of years earlier we even had been talking about getting a shelter dog as our third dog. But after a while we put it aside and it didn't come up again until November last year. Also, we decided that this was going to be my dog and my responsibility, since Loke had been mine as well. So it was now my job finding a new family member and a good life companion for Bibbi.

I started by looking at different shelters here in Sweden, but after 2 weeks of searching I still hadn't found any dog that really caught my eye. So after that I decided, most for fun, to start looking at shelters abroad. It probably took me less than an hour to find Bianca Association and after one more hour I had found several dogs that I found myself falling for. But with the huge help I got from Gosia I finally found Pluto (now Milo) and later, when I saw the "reservation" text after his name, I knew I had made the right choice.
At first, I was supposed to pick him up at Arlanda and bring him home in the end of January. But as our move to a new appartment got delayed we had to book another flight later in February, which then made it possible for me to actually go to Lissbon myself. And so, on Friday February 18th, I took the flight to Lissbon and got picked up by Gosia and her husband Agustin. On Saturday we went to the shelter and I finally got to meet Milo! Nervous as I was, thinking "what if he doesn't like me?" etc, he practically turned me up-side-down with his charm. I feel really no shame by saying that at that time I knew he was just made to come home with me.

I was even more nervous on Sunday, especially since we had to change flight half way, but both the flights and the 4 hour long drive home from Arlanda went absolutely super! The first thing he did when he got out from his box outside Arlanda was to take a good roll in the snow. Just lovely!

And when he was let into the apartment he first ate the leftovers in Bibbi's bowl, crawled around in my bed, then he found his mattress and simply laid down. It really was like he had been living her since forever.
He did sleep a lot the first week, but now, 1½ months later he has started to show some real energy and he is behaving super well. Doing well both with and without leash, he plays in the snow like crazy and he has settled in great with our routines. He sits before I put his collar on and before I give him his food. He has even melted my grandmothers heart, who always has been scared of dogs. He loves to learn and he wants to do right for himself, even if he not always understands what you mean. But he is improving day by day! He also loves to sit in my lap when I'm sitting on the floor (he actually turns around and places his but in my lap!) and he also seems to love jumping up with half his forebody in the sofa next to you or in your lap and just cuddle.

I bring him everywhere and he is just loving life and loves to explore! He has been on two family-grills with me, my Dad, my aunt and cousins, running around without leash and this Friday we even went for a walk out on the thick ice.

I guess Milo just was that little thing we needed and missed at home. Even our cranky dauchs-lady seems to have fallen for him.

And this is all thanks to all the great work you do at Bianca and the amazing help I got from Gosia! Truly. 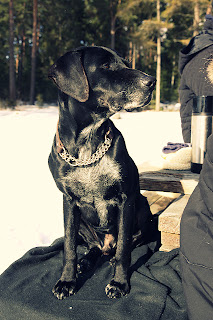 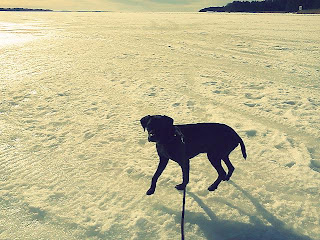 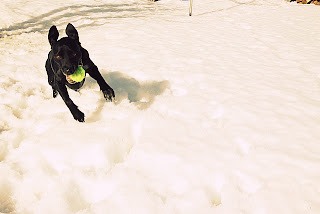 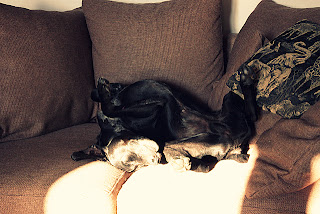 After this weekend-long trip I came home with the experience of a lifetime, and a best firend. I was treated so well by Gosia and Agusting and I was truly amazed with how well-run and well organized the shelter was, especially with around 230 dogs to take care of every day. This might have led to yet another trip this summer, and maybe even a third companion to our two musketeers!