The story of Kalif 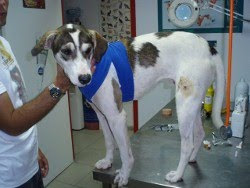 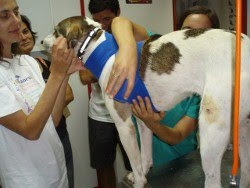 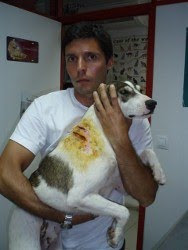 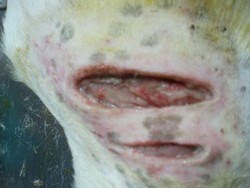 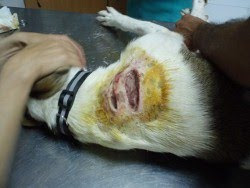 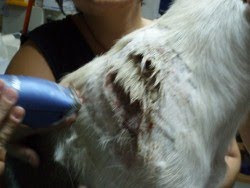 On Saturday 15th of August in the evening we were doing a campaign near the beach of Sesimbra - we had kittens for adoption and we were distributing leaflets about the work of the Association. And a dog appeared....
We had already been contacted by many people since August, 12 and even by maritime police about a wounded dog being seen in Sesimbra but somehow noone managed to catch him. In the evening of the campaign this dog appeared and because of the nature of the wounds we knew it was that one.
He was very hungry, he approached us because of the smell of cat food so we fed him and then we noticed the wounds. On the side, terrible, two parallel big cuts, deep and infected. We put a collar on him, attached the leash and called the vet. It was Saturday evening, around 22.30 and the vet was closed but she agreed to go quickly to the clinic and wait for us.
Then, from the other side of the street a man came, with a glass of beer in his hand, shouting: "Thieves! You are stealing a dog!" It was not the owner of the dog, it was just a violent man who hated animals and maybe drank too much and was looking for a fight. He said that the animal had an owner like all the animals on the streets of Sesimbra (???) but he did not know the owner. Stiil it did not matter, we were thieves and we were not supposed to take any dogs from the street. Explanations did not help - showing the wounds, explaining that the vet is waiting that if the animal has an owner he can find him in the vet after the treatment. The men was becoming more violent and offensive, was shouting, threatening to harm the woman that was protecting the dog in her arms, offending the foreign volunteers that were there ("you have nothing to do here, you have nothing to do with our dogs, go back to your country!"). A crowd of people gathered around - most observed but to be fair some people tried to intervene on our behalf and only the arrival of the police put an end to the confusion and we managed to take the dog to the vet.
The vet admitted that the wound was very ugly, infected, already days old and it two-three more days the dog would be dead. The wound was cleaned although it could not be sawn, the bandage put and the dog stayed in the vet. He will be fine. He needs some time to recover but he will be fine. He was very gentle when the vet was treating him, sometimes crying but letting himself be treated. It is a young dog, he is around one year old, maybe less. His teeth are all white yet. But he has no owner, he has been walking around Sesimbra with this wound for 4 days before we took care of him. He has suffered enough cruelty and indifference, we would like to find a good home for him.
We called him Kalif, as the first time he was seen on the beach of California in Sesimbra.
After leaving him in the vet we went back to the police to present a complaint against the violent men from earlier that evening.
If you have witnessed this incident, please contact us at: sesimbra.bianca@gmail.com
Publicada por Association Bianca à(s) 14:03

Keep up the good work! You people are great!!
A man like that does not understand, I am sorry you had to deal with someone like that after such a long day of work helping the animals....

What a stupit person....why that behave?! Keep the good work, you are great people. Thank you for exist! Yvonett

some people are very unhappy and act out their frustration to inocent people or animals.
it seems this acting out, makes them feel powerfull and in controll.
i don't understand this.
But i really are glad that organisations like Bianca care for those who are victim of this kind of violence. Keep up the good work!

I am horrified by the behaviour of some people.

Kalif owes his life to Bianca and its supporters. These are the people I admire.

How is Kalif doing now?