Blondie and Gigi - adopted from Bianca: an account from their owners 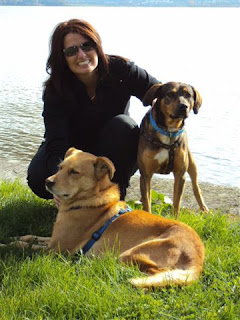 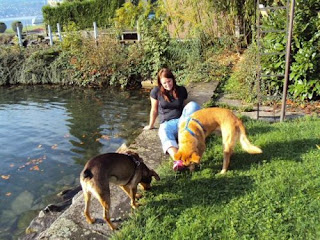 One year ago our beloved dog Bobby, died. We knew that we soon would like to have a new dog and since we have family in Portugal it became a natural choice for us to take a dog from there. We had already heardfrom them what a fantastic job "Bianca" does, so we used the information about the dogs that we found on the web-site and tried to compare it to what kind of dog that would suit us.After a couple of months we had a short list with about eight dogs onit. If we were lucky maybe one of these dogs would like us too, once we met! We planned our trip carefully. Would the dog be able to handle 12 hoursin the car one day and 12 hours the second day? Would it feel sick? Would it be scared? There were quite a few questions. Our car got equipped with a good coverthat serves as protection for the car seats as well as it protects thedog from falling off the seat if we had to break hard. There was a waterbowl and food for the trip home. Also a leash and a necklace and acouple of towels in case of sickness.
Coming from abroad you have to check your country's rules in order toimport your dog. In Switzerland you need a EU passport, vaccination against rabies andthe dog has to be chipped. Preferably the dogs shouldn't have anyparasites in the blood, but you can ask your vet for more information. Some kinds of parasites are less dangerous and can be treated once you get home.
Finally we arrived in Portugal and had our first meeting at "Bianca". We were very impressed with how well the dogs were taken care of eventhough the means are very modest. We had a tour and met all the dogsinside. There was lots of barking and friendly happy dogs jumping up anddown all around us.How would we be able to pick just one?? We took the dogs on our list andhad a short walk with them to see how we could get along. They were alllikeable dogs, but two of them DID stick out! Blondie and Gigi! (Have you already guessed? We got home with both of them.)
We went together to the vet and cleared all the paperwork and then we took them to our family in Sesimbra in order to see if they could alsomanage to live in a house. They more than managed! There were only a couple of fights at night. They both wanted to be as close to us as possible. We decided not to let them spend the nights in bed. Our Bobby did, and he got most of the space and we woke up with pain everywhere,every morning!!! So, this time we tried to be a bit tougher. Jealousywas a bit of a theme the first two weeks before they realized that theyboth had a place in our lives. They now sleep in the room next to oursand the door is closed. Nothing to fight about any more! They get alongjust fine and sometimes even share the same dog mattress! They also lick each others faces and wait for each other when we are out walking. As you have already understood, we decided to adopt both of them andstarted on our long trip back home to Switzerland. You would have expected them to be bored and bark and fight after a couple of hours, but they did so well. They slept most of the way. We spent the night in a hotel in France. Gigi tried to pee a couple oftimes, since the hotel also had a house dog. Lots of exciting smells inthat building.The next day also went fine and we arrived at the third home in only oneweek. Somehow it was like they felt that this was the final home. Theymade themselves comfortable and looked relaxed already after the first two days. Before we left forPortugal we had found a lady who is going to walk them when we are atwork. They met with her a couple of times before she came to take care of them alone. Now it is working out fine.
Taking a dog or two is a big responsibility and the first days I was abit in panic, wondering what I had done to my comfortable life! I felt limited and scared that I could no longer do all the things that I usedto do. It is normal to feel like that I think. You have to give yourselfand the dogs some time to adjust! The more you get to know them the happier you get. They give so much love in return and become part of your family. After a week I had already forgotten that I once had beenworried! I watch them when they lie next to me on the sofa and I knowthat I have a big smile on my face. I think about them at work and Ic an't wait to get home and walk them! After the walk we relax and justenjoy being close! We walk them four times a day. Three shorter walksthat last about a quarter and a longer one that last half an hour to anhour. When they have spent some energy they get very calm and you canalso have some time to yourself if you like. Our experience with "Bianca" and our new family members has been remarkable.We have only positive things to say and can also give advice if you needit.There were questions that popped up once in a while, so we mailed"Bianca" and got the answers we needed. It is good to be prepared andget as many answers as possible from the start.. A dog is as much responsibility as a child and it needs a lot of love and attention. If you feel that you are the right person to give it the safe home itdeserves, you will be like us - the happiest people on earth!