Robby was found on the national road in that condition. Honestly, he was one of the worst cases we have ever seen. His fur is a mess, full of grass, little sticks of wood, dirt, leaves and all other stuff and because of this his fur was so dense and heavy that he could hardly walk.
He had a collar against parasites - which by the way was years old - glued to his little neck and of course it caused him wounds.
After we shaved him completely we could see him better and we noticed he was very skinny. He had been straving for a long time.
We suspect he has never had a cuddle or sign of love, never has been well fed or bathed and spent all his all life tied on a chain.

Robby is blind. There is nothing to be done about it. Early enough his eyes could have been operated but not anymore.

He also has a small tumor on his lip, thsi can be easily removed.

We also found out that he suffers from epilepsia, but this is controlable with proper medication.


Robby is a small male dog, fits in every corner or on a sofa and moreover, he is a very sweet and kind dog. He loves company of people and cuddles.

He truly deserves a new chance to be happy and loved. 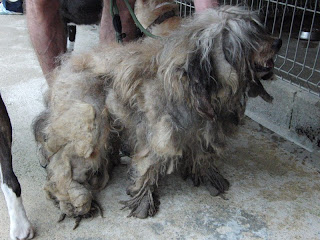 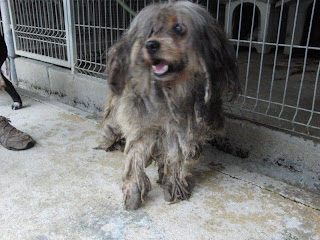 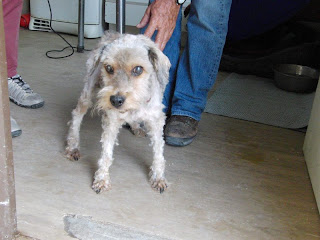