Today, 29th of December, me and Rosa received a call from a woman who saw an ill dog. I went there as soon as I could. When I arrived, I was loking for the dog but I saw nothing. So I called the woman and she told me to look very well in the middle of the grass.
So I walked for some minutes and I saw a sad "picture". A dog layed there, ill, afraid of people

.
I tried to feed him and he wanted to eat but as soon I wanted to catch him he moved back. The woman who called us came to help me, she lives there. She brought cheese and after 30 minutes we forced him to enter my car puting a collar on her neck and a leash. We went to the vet with him and the vet said he is about 10 years old. The bloodtests said us he has anemia, leshmanie and his kidneys are affected. The vet said the values of the tests are not dramatic and we should try to sav 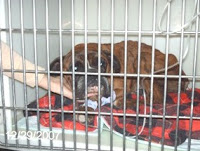 e him. He wants that we save him, said Dr Luis! We are trying to save him, he is taking Aluporinol and some injections. He will be in Vet Clinic during 3 days to see if his kidneys reach satisfied values and then we begin with Glucantime. He is a big boxer, friendly, and lovely. The person who abandoned him had no courage to take a decision or to treat him!! One more dog to treat. It is dificult in this country for dogs and for those who want to protect and save them, our true friends.
Publicada por Association Bianca à(s) 09:54