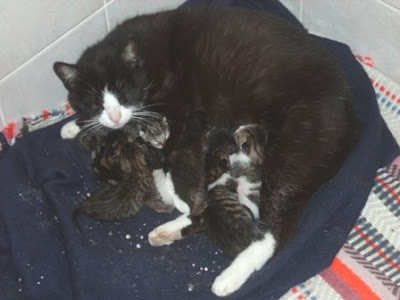 On Saturday, April the 9th, a lady living in Cotovia, near Sesimbra, called Bianca to inform that a cat had given birth in her backyard. We either could pick up the kittens or she would let her Rottweilers take care of them.
That same day 2 volunteers went there to try to catch the cat and 6 kittens. We were worried that the cat would react badly, as a stray cat with kittens is difficult to handle. Fortunately they managed! Congratulations to Jaime and Lena.
That same Saturday in the early morning another cat had given birth in a dogkennel at the entrance of the house of one of Bianca's members of the board. In order to avoid the dogs making trouble it was necessary to move the kennel to a more distant place.
The cat didn't move and the kennel was put in the basement, but later she got frightened and ran away to be never seen again and leaving behind the 4 kittens.
We then joined these 4 kittens with the first cat, whom we named Nini, and she received them with 'open arms'.
So now we watch them all, rolled up against Super Mom cat.