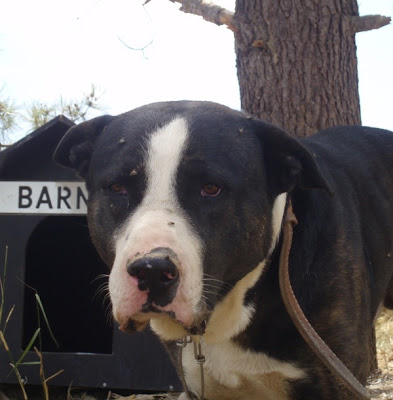 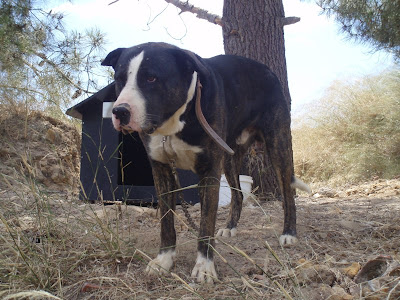 We found this dog: a cross between a pitbull and another big breed, maybe castro laboreiro (a portuguese breed) attached to the gate of our shelter in the early morning of 10th of July, Thursday.

A number of people already recognised him: his name is Las Palmas and he belongs to the persons owning a fishing boat in the port of Sesimbra, Anacletos.

He was seen many times running after the motorbikes in the port.

We got in touch with the owners. They admitted the dog was theirs but they don't want him back. They said they would pay some money for his stay in the shelter and bring his booklet of vaccinations. This NEVER happened.

Beautyfull boy! Wish him all the best.

He has a pitbull face, at the beginning I was a little bit afraid of him. But he is so calm and so nice. Poor thing, he looks sad... Tomorrow I am going to drive there and take him for a walk.
In this country people are paranoid, whatever has a pitbull face, they are afraid of.

Hope you had a nice walk together!

We did. But he is not happy. There are dogs that get used to the shelter and they actually enjoy their life there. They run free, play with other dogs.
He is chained and we only take him for a walk twice a day. He is too big to go free around the kennel and too new. Other dogs will fight him. But he is used to being free, he used to run around. He is confude by a new situation, he babs a lot, which actually means he is a bit scared.
We have 4 people working in the kennel, they can only give limited attention to each dog. I am worried about him. He needs to find a home. Some big farm where he could run free. he is not happy in teh shelter.....