Safira in July, when rescued from the street 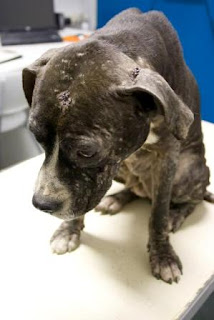 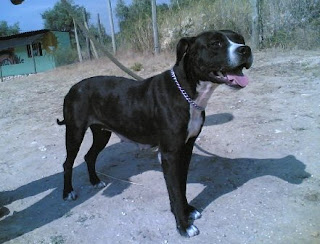 Safira is a doggie that was rescued from the streets in critical state.
Rescuing her was urgent, especially to take her quickly to the vet to have her tested to rule out some diseases like Leishmaniasis. The diagnosis was some sort of curable skin disease, which probably got worse after a long period passes on the streets. She resulted negative to leishmaniosis.
Her skin treatment started, along with a physical and psicological rehabilitation. Since she was taken out from the streets, on July 22nd until today, she has recovered very well. If we do a "Before and After" comparison with pictures, the differences are astounding. She has done also a great psicological progress, holding up to this new opportunity she was given with all her forces. She looks like a new dog!

She is an uncomparable source of sweetness and tenderness. She loves to be close to people, always ready to accept some cuddling. Nowadays she smiles, jumps, wants to be held in the arms, shows her belly...

She likes to walk on the lead, always keeping the pace of the person she accompanies. She also likes so much to run after her toys and balls!
Despite being very happy now, Safira needs to find some caring owners, to give her all the love she needs and that she (presumably) never had before being rescued. She holds on to any and every little piece of affection she receives, as if it was her last opportunity to achieve happiness. She retributes in every gesture and every look all that has been done for her.
Safira is ready for adoption, she needs responsible owners that will be ready to accept the rules and laws that a four legged friend like her requires (Clear criminal record, insurance, vaccinations, registration at the Junta de Freguesia, terms of responsibility). She will soon be sterilised and microchiped.
Although she is happy now, we believe the best for her would be to find someone that would love and care for her for the rest of her life.

Where are those owners that will love you so much, little princess?