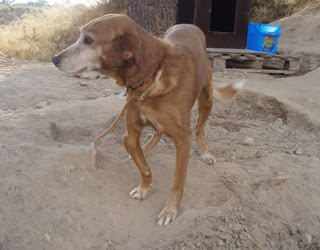 Preciosa is a shy, sensitive adult female. She has been seen roaming the streets and garbage containers of Maca, near Sesimbra, for quite some time. A collaborator of Bianca realised that she had a strange way of walking. On a closer inspection, it resulted obvious that her limp was due to one or more massive fractures to her right front leg, which consolidated in an unnatural way, not having ever been treated medically.
It is sad to see that many people still believe that the old saying that dogs go away to lick their wounds should be applied on practical terms, meaning that their pets do not need (or deserve) any kind of veterinary attention. if they cure by themselves, all the better; if they die trying, well after all they are animals, are not they?
They also think that old animals, with their fragile healths, are a load and therefore the best thing to do is to abandon them as soon as they become sick. Let's hope that Fate will pay them back in the same currency, when they grow old and fragile and their loving children, having learned from their example, stow them away in the cheapest asylum they can find, never to visit them again.
Preciosa's leg is beyond repair, but she manages pretty well to walk, being altoghether a very healthy dog who now awaits for a family that will compensate her injuries with loads of affection.

UPDATE: good news! Preciosa was lost, not abandoned, her owner came to pick her up from the shelter. They were both very happy!