This puppy, Paulinho, was rescued from a gipsy camp.
For nearly a month one of our volunteer was seeing a small puppy attached with a cord to the fence with his leg in the air. Obviously the leg was broken and not treated so it healed badly and the puppy is not using it.
The puppy is small and thin, he cannot be more than 5 months old.
One day the luck was on his and our side. He broke the cord and run away, straight into protective arms.
His leg was indeed broken and badly healed, it needs to be operated. And he has a wound on his neck when the tight cord was.

At the beginning he did not understand human kindness so he growled at everyone but now he got used to, he understands we want to help him and he has become a sweet puppy. A 5- month old puppy to growl at puppy - he must have been very badly treated to react like this.

Now he is in a temporary family, because he does not have any vaccinations. Only when he has got his second vaccination he will be operated on his leg.

We need support for his surgery!! 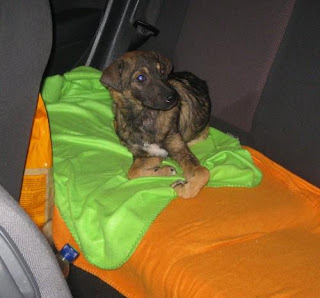 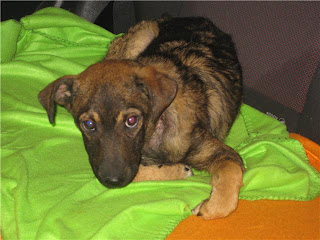