In one single day we received 15 dogs! The situation is critical.

On June 22nd 15 dogs were abandoned in our shelter. A mother with 11 puppies – the puppies were in a plastic box taped with scotch with holes to allow them to breath and separately 3 more puppies were abandoned there at the same day.
People here don’t respect dogs. They also don’t respect people that work for the well being of dogs and other animals. Puppies are cute, everyone likes them but when they grow a bit or when people realise that apart from being cute they also require some work, then they just dump them at the shelter. So someone else would take care of the problem. Why don’t their sterilise their animals? They think that because we are an Association that helps animals we are obliged to accept them all. No, we can only accept them as long as we have conditions for that and our shelter has a limited capacity.

This is lamentable. Attitudes like this show how much Portugal is lagging behind the rest of the European Union, not only in financial terms but in particular in social terms.

The puppies that were abandoned were neglected, full of parasites and the costs of treating them, feeding, vaccinating is not negligible. Not even mentioning the time they take. Naturally, as soon as their owners understood that, they dumped them at the shelter to be someone else’s responsibility.

This kind of action only shows how behind our Portuguese society is... 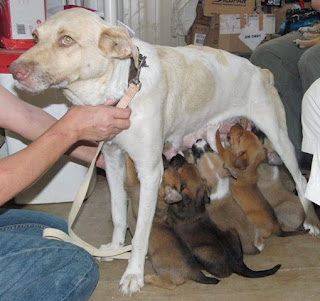 Tulippa and her puppies, still needing her milk 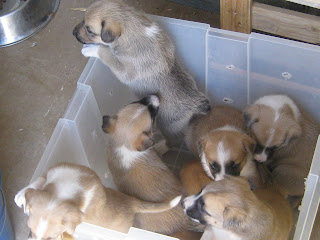 This is the box the puppies were abandoned it, only that itbwas closed and sealed with a scoth; you can see little holes drilled in the box so the puppies could breath 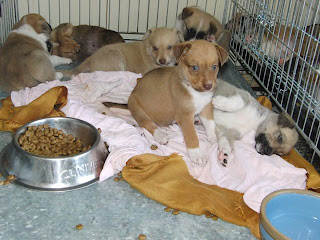 The puppies are now in 2 cages, waiting to be adopted.
Publicada por Association Bianca à(s) 08:36